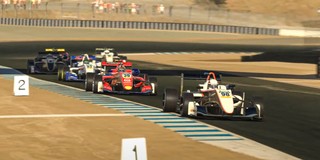 Thursday night, the SCCA eSports racers took to the twists and turns of Laguna Seca for the penultimate points event of the second Hoosier Racing Tire SCCA eSports Super Tour. The 11-turn circuit tested discipline and patience throughout the two races of the evening: Dallara F3 and Global MX-5 Cup.

The 22-driver F3 field was led to the green flag by polesitter Caleb Patrie who stretched out a 10-car length lead on the first lap over Max King. A mid-pack incident took several cars out of the race in the second turn, including Jackson MacLeod who spent the remainder of the race clawing his way back up from last, to finish eighth at the checkered flag.

At the halfway point, points leader Andrew Pallotta passed Max King for second while Patrie continued to lead by several seconds. With two laps to go, King resumed second position and began his chase for Patrie. King was able to get to Patrie’s rear wing but was afforded no opportunity to complete a pass. In an exciting final lap, King made no fewer than five attempts to take the lead. All were shut down, including in the final turn as Patrie pulled King up to the checkered flag with a margin of victory of just 0.147 second. Pallotta remained within sight of the lead battle to finish third, 1.617 second behind King.

Despite being 11 seconds behind the leaders, Jake King and Evan Rakusin had a great battle for fourth, finishing just 0.443 second apart with King in fourth and Rakusin right behind in fifth.

As we head into the final event of the season, Pallotta continues to lead in points, but as the drop comes into play next week, Max King is right on his tail. Unless both drivers finish off the podium next week at Road America, the higher finisher of the pair will be the season winner, earning a free rental in a Competition One Formula Enterprises 2 car at the real-life Blackhawk Farms.

For much of the week leading up to this race at Laguna Seca, points-leader DJ Alessandrini has been predicting John Allen as the winner. As qualifying wrapped up, it became clear that Alessandrini knew what he was talking about and Allen definitely knew his way around the 11-turn track.

From the start, Allen took off, never to see a threat to his lead for the entire 20-minute race. Alessandrini was able to keep eyes on Allen for much of the race, but the final margin of victory was an impressive 7.094 seconds in the typically close racing class. To his own credit, Alessandrini finished with a 3.113-second gap on the remainder of the field.

Behind those two leaders, the racing was incredibly close. For the first several laps, the battle for third involved 10 drivers—where a mistake could send one to the back of the train of closely matched cars. Even as that train began to spread out late in the contest, there were great battles throughout the field. Selin Rollan and Luke Pfeiffer diced for the final step of the podium with Rollan claiming the spot. Behind them, Ismael Basso, Kevin Zhu, Elias Roman and Tony Chow had the most consistently close racing of the night. After qualifying second, Chow fell to 13th on the first lap, falling victim to the train of cars battling for 3rd. He spent the race climbing back to an impressive fifth-place finish. Basso, Roman and Zhu claimed sixth through eighth place finishes respectively.

The Hoosier eSports Super Tour continues next Thursday with its final virtual stop, at Road America with sessions starting at 8pm EDT and broadcasts streaming live on Facebook and YouTube starting at 9pm EDT. Stay up to date on all SCCA eSports news on the eSports homepage, and never miss a broadcast by liking @SCCAOfficial on Facebook and subscribing to Sports Car Club of America on YouTube.